When it comes to drug charges, much depends on the type of drug and amount found.

When you get arrested for a drug charge, you could wind up in jail for weeks or months as you await your hearing. At Ammediate Bail Bonds, we offer bail bonds for drug charges in Cocoa and Palm Bay, FL. If you want to carry on with your life and responsibilities while you await your day in court, remember this number: (321) 631-2663. At Ammediate Bail Bonds, you can call us 24/7 to post bail for yourself, a friend, or a loved one.

Drug charges carry a huge array of sentences. From minor possession that results in a misdemeanor, to a felony charge of possession with intent to sell, punishment can range from probation to decades in jail. Regardless of the charge, we can at least get someone released following an arrest. As with all matters that involve a court, it will also prove helpful to learn more about Florida’s drug laws. 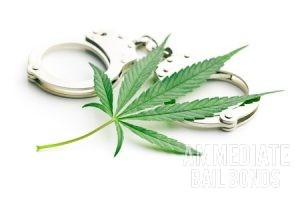 Small amounts of marijuana result in a first-degree misdemeanor.

Many factors come into play with the determination of drug charges. You should also keep in mind that historically high addiction rates have led to Florida’s adoption of some of the toughest drug laws in the country.

Substance in Question: The nature of the charge depends much on the substances found at the time of the arrest. For example, in Florida, up to 20 grams of marijuana will result only in a misdemeanor. Drugs such as cocaine, ecstasy (MDMA), heroin, and meth carry mandatory felonies, regardless of the amount.

Amount in Question: Next to the substance in question, the amount found stands as the second-most important factor. Any more than 20 grams of marijuana results in a possession with intent to sell charge. This counts as a third-degree felony with up to five years in prison. If you happen to have 25 pounds or more of marijuana, the charge gets upgraded to a first-degree felony with up to 30 years in prison.

At Ammediate Bail Bonds, we offer bail bonds for practically any drug charge. Rather than sit in jail, you can spend your time in the preparation of your defense. For any drug charges in Cocoa and Palm Bay, FL, call us at (321) 631-2663 to arrange bail for yourself or someone you know.